Altafiber and the Butler Rural Electric Cooperative are expanding an existing partnership to deploy broadband infrastructure to 5,000 more addresses in Butler, Preble and Montgomery counties, Ohio. The availability to these addresses will begin during the first half of next year.

Altafiber – the name that Cincinnati Bell adopted early in March for its operations in Ohio, Kentucky and Indiana — and the Butler Rural Cooperative initially partnered in 2020. The first phase of the project, which was completed last year, was to bring fiber-based connectivity to about 2,000 member locations and to electric company substations and switching equipment.

The 5,000 new addresses include 2,800 remaining locations in the Butler Electric Cooperative service territory and 2,200 addresses outside that territory.

“This initiative has been a huge success,” Butler Rural Electric Cooperative General Manager Tom Wolfenbarger said in a press release. “The cooperative has greater operational flexibility to improve reliability, and we have received tremendously positive feedback from members whose children are now able to access and do their assignments from home.”

Altafiber says that it has invested more than $1 billion to expand fiber infrastructure across the region.

In February 2000, Butler and Altafiber –then still Cincinnati Bell – said that the 1 Gbps service they would bring to the cooperative’s members would include home phone, whole-home Wi-Fi and Internet security. Cincinnati Bell’s partnership with YouTubeTV would provide a video option.

The possibility of expanding the project was mentioned at the time. At that time, the potential was for 3,000 additional addresses, 2,000 fewer addresses than in Friday’s announcement.

Partnerships between telecom service providers and electric cooperatives are attractive because they enable sharing of capital and operational costs and dual usage of the infrastructure to serve both telecommunications and electric service functions. 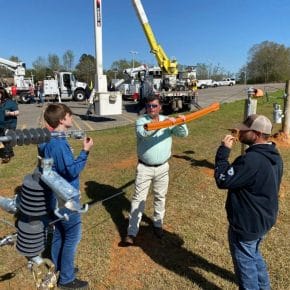