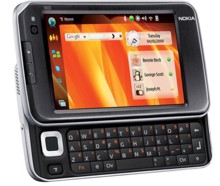 Seems like all the wireless carriers are rushing to claim top dog status for broadband wireless these days. Sprint claims they lead the pack by way of their present day 4G WiMAX service, currently operating in Baltimore, MD. Verizon recently tried to steal some of Sprint’s glory by announcing their 4G LTE plans were ahead of schedule, promising a late 2009 launch. Not to be outdone, here comes AT&T, now claiming both Verizon and Sprint are under manned with broadband wireless due to deficiencies with CDMA technology, thus their need to boast about 4G capabilities. AT&T says they don’t need to rush to 4G, because their 3G GSM technology can hold the tide for now. To prove it, they claim to have achieved a 7.2 Mbps download speed in a recent Chicago test. For comparison sakes, Sprint is currently claiming average download speeds of “2 to 4 Mbps” for their Sprint 4G product. AT&T Mobility spokesman Mark Siegel tells RCR Wireless, “We have some real advantages with our (GSM-based) technology path.” Siegel went on to say “We still have plenty of room left to increase speeds before moving to LTE.”

The race to broadband wireless supremacy is on, and the stakes are quite high. No one can answer definitively yet, but it’s safe to say that a significant number of households will not only cut the cord for wireline voice, but also for wireline broadband as well. With 4G wireless technologies like LTE promising dramatically higher speeds, with 10’s of Mbps of throughput certainly viable, who needs DSL (although I freely admit, no one really knows what happens when hundreds or thousands of customers simultaneously demand that 4G speed in any given cell site). Recent data by the U.S. Centers for Disease Control and Prevention (CDC) indicate nearly 18% of households in the United States have no traditional telephone and rely on wireless services only (by the way, is it just me that wonders why the CDC is collecting and reporting on this data?). Combine that growing trend with recent commentary of the Pew Internet Life Project which recently predicted that the mobile phone will be the primary means of Internet connectivity for the majority of the world by 2020, and one can see the motivations behind the broadband wireless bravado. As I’ve discussed before, we’re at the beginning of a broadband land grab and broadband wireless will increasingly grab more communications wallet spend for both consumers and enterprise. With that much at stake, get used to the bravado.