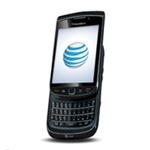 RIM introduced the Blackberry Torch 9800, its latest smartphone and its first with a combined touchscreen and QWERTY slide out keyboard yesterday, teaming up with AT&T to do so. AT&T, of course, also happens to be the exclusive US carrier for RIM arch rival Apple’s iPhone. The launch comes on the heels of the UAE and Saudi Arabia announcing that they would block Blackberry’s proprietary messaging service.

Retailing for AT&T customers only at AT&T retail outlets for $199.99 beginning August 12, buyers will need to sign up for a two-year service agreement on a qualifying rate plan and smartphone data plan. Two AT&T data plans will be offered: $15/mo. for 200 MB of wireless data and $25/mo. for 2 GB. The Torch will also be available online at AT&T, as well as at Best Buy, Wal-Mart and RadioShack stores.

Continuing to focus on and enhance its core strength in messaging capabilities, RIM and AT&T are also touting the Torch 9800’s new Web navigation, search, social networking and geo-location features. Here’s the full list of features: