The latest iteration of the Australian National Broadband Plan might suggest the financial risks fiber to the home networks represent, even in a scenario where a single national wholesale network is able to sell capacity, access and services to 90 percent of all retail service providers, meaning the fiber to home network has potentially 90 percent take rates.

Among the key assumptions are that 30 year incremental rate of return will be seven percent (7.1 percent) on a capital investment of $35.9 billion through 2020, based on wholesale access rates between $20 and $27 a month.

The current forecast calls for about 44 percent take rates in 2015.

Revenues to 2021 are forecast at $23.1 billion, with operating expense expected to be
$26.4 billion. Some observers will not be reassured that in the latest forecast revenue expectations were lowered, while operating expense assumptions were raised. The latest plan also raises take rates after 2021, an assumption that raises cash flow projections.

The latest version of the business plan does suggest that the actual direct financial return from a fiber to home access network, built on a continental scale, is relatively small, despite its societal and economic importance. With a seven percent incremental rate of return, over a 30 year period, a reasonable observer might simply note that there is little room for error where it comes to the base assumptions. Lower takes rates, lower average revenue per user ir unexpectedly higher operating costs are some of the dangers embodied in the three decade assumptions.

The plan anticipates connecting about 5.5 million locations by 2016, with wireless-only households growing from about 13 percent to 16 percent by 2020.

That is an important assumption, as it indicates the percentage of homes passed that will not be buying any services from the NBN network. Obviously, the assumptions are sensitive to greater than expected wireless-only behavior.

Skeptics will note that a favorite device of government forecasters is to make future assumptions about revenue and cost that are not realistic, in essence overstating revenue and understating cost. It is too early to say whether that is the case here. The point is that a seven percent IRR does not allow too much room for mistakes on either the cost or revenue fronts.

Oddly enough, the traditional arguments about which network makes the most sense (cable hybrid fiber coax, fiber to home or fiber to neighborhood probably are reversed, in this case.

Given the 30-year time horizon, with conservative forecasts of 30 percent annual increase in data consumption, up to perhaps 60 percent annually, the safer course arguably is simply to install the most “future-proof” network.

“Average” data demand always is misleading when dealing with Internet access, and that seems to be true for the NBN as well.

Beyond 2021, a substantial proportion of customers still are forecast to be buying access at 12 Mbps downstream, /1 Mbps upstream. The reason is that some customers might want “voice only” service while others will be very light users.

On the other hand, the network still must have the ability to support the more than half of all customers buying service running at a minimum of 100 Mbps in the downstream. 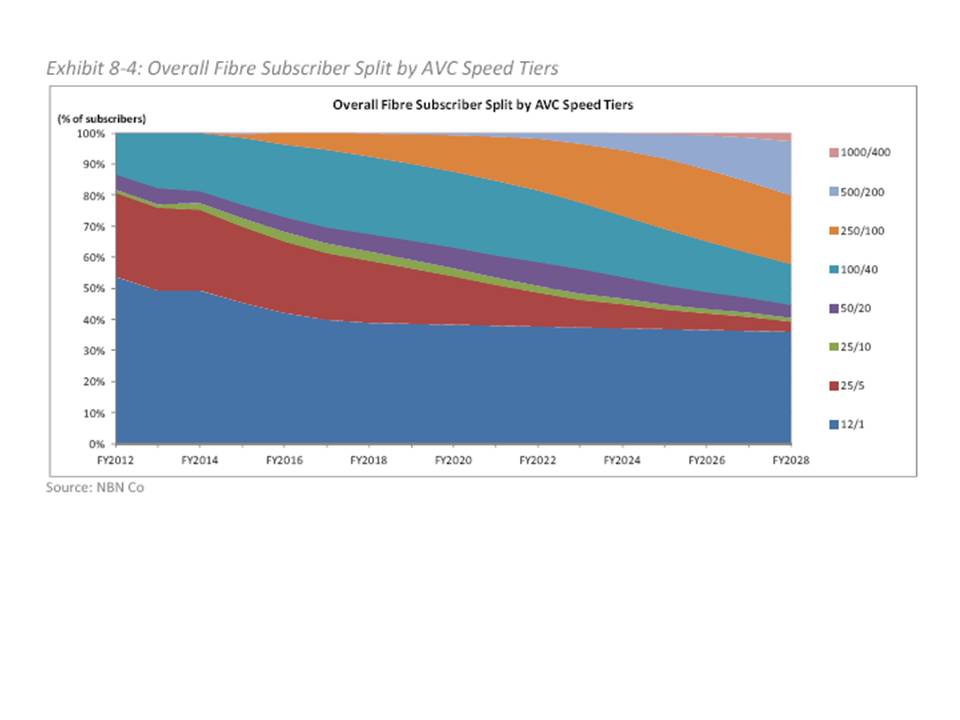