Home » AT&T Traffic Up Almost 20% Amid COVID-19: Text and Voice Traffic Up, Mobile Data Actually Down 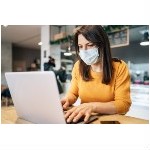 Daily traffic on the AT&T Global Network is more than 391.8 petabytes, an increase of almost 20% compared to the average on a typical day before COVID-19, the carrier said in an update on AT&T COVID-19 traffic and the company’s network performance during the pandemic.AT&T has seen significant demand for individual services. The pre-COVID record for texts was 15,000 per second. During the March spring break and on Easter weekend 23,000 texts crossed its network each second — a 53 percent increase.

Wireless voice increased almost 40%. Mobile data slightly decreased. This, according to AT&T, was because people were home more and used their home Wi-Fi a higher percentage of the time. The carrier says its network is performing well, despite the increased traffic, due in part to the $135 billion investment in the network during the past five years.

FirstNet Impact
There are more than 1.5 million connections to the FirstNet mobile broadband first responders’ network that AT&T operates, a company exec said in the posting about AT&T COVID-19 traffic. So far this year, FirstNet has fielded more than 450 requests for deployable assets, including help at drive through COVID-19 testing sites and non-pandemic events such as hurricanes and the wildfires on the west coast.

First responders on FirstNet use more than twice as much data compared to general consumers. FirstNet made more than 4,750 network assessments for state, tribal and federal sites for medical facilities, emergency operations centers, drive-through testing sites, quarantine centers and other locales.

The carrier says it has passed 80% of its target deployment of Band 14 for FirstNet. That is ahead of schedule.

AT&T, like other carriers and service providers, has taken steps to support its customers and the nation at large during the pandemic.