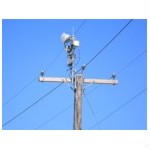 “Project AirGig has tremendous potential to transform internet access globally – well beyond our current broadband footprint and not just in the United States,” said John Donovan, Chief Strategy Officer and Group President, Technology and Operations, AT&T in a press release. “The results we’ve seen from our outdoor labs testing have been encouraging, especially as you think about where we’re heading in a 5G world. To that end, we’re looking at the right global location to trial this new technology next year.”

AirGig Technology
The AT&T patented technology has been in testing mode with AT&T labs. It features low cost plastic antennas which are situated along power lines. The power lines regenerate millimeter wave (mmWave) signals, which can be used for mobile and fixed broadband access.

The AirGig system acts as its own backhaul across these powerlines, and connects with some type of wireless radio in a small cell or DAS configuration for broadband distribution to the home or mobile device. AT&T says they can use any wireless technology they like, including 4G LTE, unlicensed wireless, or even 5G to deliver broadband to customers off of AirGig. The choice of wireless technology will dictate the range and performance customers receive, but AT&T executives stressed multi-gigabit capability.

Rural Broadband Applications
If AT&T’s optimistic claims are correct, AirGig technology could be a disruptive broadband access technology for mobile and fixed networks.

“Project AirGig delivers this last-mile access without any new fiber-to-the-home and it is flexible enough to be configured with small cells or distributed antenna systems,” says AT&T in the press release. “No need to build new towers. No need to bury new cables in the ground.”

It may also provide better mobile broadband access in rural areas, where 4G is less penetrated.

AT&T provided deployment timelines for the technology as somewhat aligned with 5G, saying it’s about a year behind 5G. They plan to provide details on trials, which should start next year, in the near future.