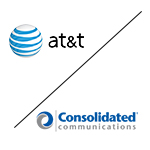 Koester declined to provide details about how AT&T would be compensated, such as whether salespeople would receive a commission or whether there would be a flat-fee arrangement.

According to Koester, Consolidated has had “a long and productive relationship with AT&T reselling its products and this relationship is a natural outgrowth of that successful collaboration.”

Consolidated has de-emphasized its own video offering in favor of a range of streaming video options, including AT&T’s DirecTV Now, but streaming options may not be viable for those Consolidated customers that do not have the highest broadband speeds available to them and for whom DirecTV satellite service would be a better choice.

Consolidated became a major player in the northern New England broadband and telecom market in 2017, when the company purchased Fairpoint Communications. Consolidated has made it a priority to upgrade broadband speeds available to customers in that area.

The AT&T Consolidated deal would appear to be a win-win. From Consolidated’s point of view, it offers a means of reaching people the company might not otherwise be able to reach. And from AT&T’s point of view, the deal offers a way of monetizing the company’s retail and call center footprint. Indeed, it wouldn’t be surprising to see AT&T pursuing similar deals with other broadband providers that don’t offer wireless.

A potential disruptor longer term would be if AT&T begins to aggressively market broadband outside its traditional local service area – potentially by using fixed wireless. But northern New England is unlikely to be a key target for such service, at least not for some years.