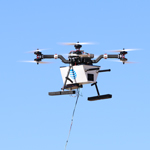 AT&T has been testing the use of drone-mounted radios and antennas to augment its cellular network in the case of a natural or manmade disaster or for certain other use cases, said Art Pregler, AT&T drone project director, in an interview with Telecompetitor. The company calls the cell site drones “flying COWs,” borrowing the acronym used for cellsites-on-wheels (COWs), which currently play a similar role in the company’s network.

The flying COWs are “very fast to deploy and move,” explained Pregler.  “They go to a higher altitude than ground-based towers.”

AT&T completed what the company calls an “inaugural test flight” of a flying COW this week – an achievement the company documented on video.

Cell Site Drones
While truck-mounted COWs can only be extended to a height of about 50 to 60 feet, flying COWs can go up 400 feet – the maximum altitude allowed by the Federal Aviation Administration, Pregler noted. This gives the cell site drones greater range than their truck-based counterparts – about 40 square miles, according to AT&T.

The capacity of the drone-mounted radios is less than for truck-mounted COWs. But AT&T plans to address that by deploying flying COWs in self-optimizing clusters that will boost capacity and shift it as needed to meet traffic demands, according to Pregler.

Unlike the drones that readers may have seen carrying cameras around weddings or sporting events, AT&T cell site drones are tethered to a specific spot via a cable that will serve several other purposes as well. Inside the cable are fiber optics that will carry signals between the drone-mounted radio and a land-based router, which will direct communications to a satellite and ultimately, to the AT&T nationwide network.

Another function of the cable will be to carry power from a generator or solar panels to the drone, enabling the drone to remain in the air for an extended period of time.

“Drones usually have 20 to 40 minutes of flight time because they run on batteries,” explained Pregler. Using the power cable lengthens that time and reduces the weight of the drone by eliminating batteries.

Regulations will require AT&T to have a pilot on hand for every drone. The company expects to assign an additional support person for each drone to help ensure drone safety, Pregler said.

In addition to disaster recovery, AT&T sees use cases for cell site drones to boost capacity at major sporting events, music festivals and the like. For the latter, the company envisions using truck-mounted COWs at the center of the event where the greatest capacity is needed, with flying COWs used around outer edges.

“As the fire line shifts, you can move the drone with it,” Pregler noted.

Pregler declined to say how soon AT&T might begin using cell site drones to support applications such as these.

Before that can happen, “There’s a lot that still needs to be done,” he said.

Meanwhile, AT&T rival Verizon also is taking an interest in drones, announcing last week that it has acquired Skyward, developer of operations management technology for drones. Verizon said it anticipates using the Skyward platform to develop rate plans for drones on the Verizon network.