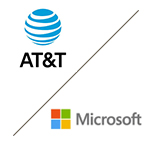 A day after AT&T announced a strategic partnership with IBM, the carrier announced another cloud-focused relationship with another blue-chip technology company, Microsoft. The two technology giants announced a multi-year alliance, focused on cloud, AI, 5G, and edge computing.

The AT&T Microsoft partnership has AT&T agreeing to migrate much of its non-network infrastructure applications to the Microsoft Azure cloud. AT&T will also equip much of its workforce with the cloud-based Microsoft 365 office and collaboration suite.

This looks to be a big win for the Microsoft cloud business line, and probably at the expense of Amazon AWS and Google cloud rivals.

The partnership will also have Microsoft tap AT&T technologies, including 5G, to build edge computing capabilities and applications. The two companies plan to work together to bring integrated technology applications to market, including voice, collaboration and conferencing, intelligent edge and networking, IoT, public safety, and cybersecurity, a press release states.

“AT&T is at the forefront of defining how advances in technology, including 5G and edge computing, will transform every aspect of work and life,” said Satya Nadella, CEO, Microsoft in a prepared statement.  “Together, we will apply the power of Azure and Microsoft 365 to transform the way AT&T’s workforce collaborates and to shape the future of media and communications for people everywhere.”

AT&T Microsoft Partnership
The two companies point to a collaborative effort on an edge-computing based effort for tracking and detecting drones as an example of the type of applications that could emerge from this deal.

Another potential example includes a scenario where a 5G equipped first responder uses AI-powered live voice translation to communicate with someone in need who speaks a different language.

“AT&T and Microsoft are among the most committed companies to fostering technology that serves people,” said John Donovan, CEO, AT&T Communications in a prepared statement. “By working together on common efforts around 5G, the cloud, and AI, we will accelerate the speed of innovation and impact for our customers and our communities.”

The AT&T Microsoft partnership appears to be broader than the just announced AT&T IBM deal. That deal is cloud-focused as well but is limited to the AT&T Business Solutions business unit, helping to better manage internal applications. A key objective of the IBM deal is to provide tools for AT&T Business solutions to better serve enterprise customers.