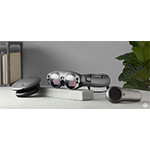 AT&T announced it had invested in and is partnering with Magic Leap, developer of proprietary spatial computing and experiential platforms that provide augmented and virtual reality (AR/VR) experiences. The AT&T Magic Leap deal will give AT&T certain exclusive sales opportunities involving Magic Leap’s first product, Magic Leap One, Creator Edition — a lightweight, wearable computer that is scheduled to ship later this year to qualified designers and developers.

The plan with Magic Leap One is to combine the ability to view virtual objects and real ones through the use of “Lightwear” glasses, the “Lightpack” wearable computer and a controller featuring  “six degrees of freedom” with a thumb-operated control pad.

However, in a live stream of the announcement, Magic Leap said that it could not ship the product until it receives the Federal Communications Commission (FCC) authorization.

“AT&T is excited to pair our pioneering technologies, unmatched network, content platform, and vast customer ecosystem with Magic Leap’s efforts to build the next generation of computing,” said AT&T Communications CEO John Donovan, in a prepared statement. Donovan has observer rights with Magic Leap’s board. “We’re designing and offering the future of entertainment and connectivity, and this exclusive arrangement – in combination with our 5G leadership position – will open up new opportunities and experiences.”

“We’ve joined with AT&T because we believe in a combined vision of expanding high-speed networks, edge computing, and deep integration with creative content,” said Rony Abovitz, founder, president and CEO of Magic Leap. “Coupling the strength of the evolving AT&T network with Magic Leap’s spatial computing platform can transform computing experiences for people.”

Under terms of the agreement, AT&T will be the exclusive wireless distributor of Magic Leap products for consumers in the U.S. When Magic Leap products are available for consumers, AT&T customers will be among the first to experience them in select AT&T stores in Atlanta, Boston, Chicago, Los Angeles, and San Francisco. Other markets will follow at a later time.