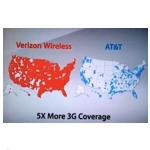 AT&T has spoken. Enough with Verizon’s ‘There’s a Map for That’ campaign, which compares Verizon’s and AT&T’s 3G footprint, claiming Verizon’s coverage is far superior. As first reported by the Wall Street Journal, they’ve sued Verizon claiming the ads are misleading and do not accurately portray AT&T’s wireless coverage.

AT&T originally asked Verizon to clarify the ads, but AT&T claims they continued in a ‘deceptive’ manner. The heart of the complaint revolves around the actual maps, where AT&T claims Verizon’s use of  “white or blank space on the maps means that AT&T customers who are not in an AT&T ‘3G’ coverage area have no wireless coverage whatsoever, and therefore have no ability to use their wireless devices for any purposes in vast areas of the country.” In effect AT&T is saying Verizon is misleading the public on AT&T’s true wireless coverage, 3G or not. They say their customers have access to wireless services on some of the white or blank spaces represented on the map – maybe not 3G – but wireless access nonetheless.

AT&T says, “As a result of this misleading claim, AT&T is losing incalculable market share, invaluable goodwill that it has spent billions of dollars to develop among consumers, and the significant investment it has made in its wireless network.” Put another way, they’re pissed.

The irony here is AT&T is not disputing that “Verizon’s ‘3G’ network covers more geographical space than AT&T’s …,” and is not saying that Verizon needs to stop running the ads or their language. They simply want Verizon to stop depicting their national network with all of that white space on the map. They want an injunction stopping the ads until Verizon makes the change.

My guess is the damage is already done. But I guess they have a point. Too bad there’s not an app for logical legal arguments.