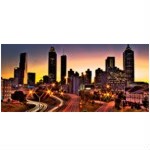 That’s the case in Atlanta, where the smart street lighting project partners are using the AT&T Smart Cities framework as the foundation for rolling out an intelligent lighting solution throughout the city, AT&T highlights in a news release.

“Utilities are critical to the success of building smarter cities across the region — and the country,” AT&T Smart Cities GM and Executive Director Mike Zeto pointed out.

“Our Smart Cities framework brings together utilities, economic development organizations, research institutions, tech companies, the developer community and, of course, the cities themselves. This helps drive real value to cities and their citizens.”

Leveraging the AT&T Smart City framework, the City of Atlanta and Georgia Power will deploy a pilot version of GE Current’s new IoT sensor platform and roll out 1,000 LED lights that can be controlled via wireless networks in five Atlanta areas. The end goal is three-fold, the partners explain:

Georgia Power chairman, president and CEO Paul Bowers noted that the smart street lighting project with AT&T and GE Current is the latest in the utility’s efforts to forge a new Smart City digital infrastructure for Atlanta.

“Connected cities become smart cities only by focusing investments like reliable and adaptive grids that enhance our ability to offer the best service and products for our customers,” he commented.