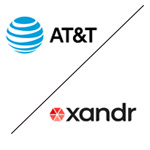 In addition to pursuing advertising opportunities on AT&T platforms, the AT&T Xandr unit also will pursue such opportunities for Frontier and Altice USA. AT&T noted in today’s announcement that by aggregating the video inventory from multiple video service providers, the total addressable TV offering “starts to provide advertisers with a one-stop shop.”

Brian Lesser, who has been responsible for AT&T advertising and analytics will be the Xandr CEO.

The Xandr name is a variation on the name of AT&T’s founder Alexander Graham Bell. AppNexus is the advertising technology company that AT&T acquired in June.

AT&T Xandr
The opportunities that AT&T Xandr aims to pursue involve providing advertisers with addressable audiences and personalizing advertising for those audiences.

According to today’s press release, AT&T Xandr will have four key advantages including “data, premium content, advanced advertising technology and AT&T’s distribution to more than 170 million direct-to-consumer relationships across wireless, video and broadband.”

In the press release, AT&T cited consumer research commissioned by Xandr that found that 66% of consumers wish advertisements were more relevant to their interests and lifestyle and 70% like when ads go beyond just selling a product.

AT&T already has been getting a premium price for advertising to its customers, according to AT&T CFO John Stephens. He told attendees at a financial conference last year that AT&T was getting a cost per thousand (CPM) close to $35 or $40, in comparison with a going CPM rate of $12 to $13 for non-addressable advertising.

AT&T’s strategy in creating a separate unit with a separate name for its advertising business is a bit like Verizon’s strategy with its Oath brand, but Oath seems to be more heavily focused on online opportunities. AT&T and Verizon share a common uniqueness among major U.S. communications service providers in that both have a landline broadband and major wireless business. Cable company moves into wireless in the last year may have been driven, at least in part, by a desire to gain the ability to target advertising to customers on multiple communications platforms.

Altice is a newcomer to the U.S. cable market and its decision to work with AT&T Xandr suggests the company isn’t following the traditional cable company path of partnering primarily with other cable companies.