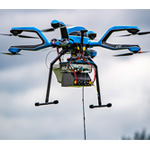 An AT&T flying COW drone demonstrated at the carrier’s Bedminster, NJ, facility and in Redmond, WA aims to help speed disaster recovery efforts. While readers may be familiar with using the COW acronym to mean “cellsite on wheels,” this COW is a “cell on wings.”

The Flying COW was created by AT&T in connection with FirstNet, the nationwide mobile broadband first responder network, funded in part by the U.S. government, that AT&T is building nationwide. The Washington test was conducted by University of Washington engineering students and included LTE test traffic.

AT&T Flying COW Drone
The AT&T Flying COW is weather hardened for extreme environments. Its features are ruggedized and it can withstand rain and wind gusts as high as 50 miles per hour, according to AT&T. It is capable of flying in snow and freezing cold and extremely high temperatures and has capabilities of “seeing” through smoke, tree cover and other obstacles, the carrier said.

The device has thermal imaging capabilities that can provide vital information, such as identifying areas of burning buildings that should be avoided. “Think about first responders operating in remote locations, battling a rapidly moving wildfire that has charred the infrastructure they need to communicate,” wrote Art Pregler at AT&T’s site. “Or search and rescue crews whose mission takes them off the beaten path where a network doesn’t exist. The all-weather Flying COW has the capability to hover above harsh conditions and remote terrain to keep them connected when other drones and deployable options aren’t viable.”

AT&T’s drone fleet already is helping in disaster scenarios. Last August, the carrier deployed 25 drones to inspect cell towers in southeast Texas that were ravaged by Hurricane Harvey. The Flying COW is the latest example of innovations AT&T has made in connection with its FirstNet public safety network plans.