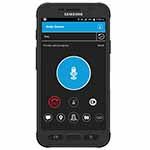 AT&T has upgraded one of the oldest mobile business services offered by wireless carriers with AT&T Enhanced Push-to-Talk (PTT) service. PTT was perhaps made most famous by Nextel, which heavily marketed the feature as a differentiator over other mobile services at the time. Nextel was eventually acquired by Sprint and the PTT feature lost some emphasis as a result.

EPTT, according to the blog post, has added four features to the service:

AT&T Enhanced Push-to-Talk
PTT services give smartphones or tablets walkie-talkie-like functionality. Generally, these platforms are aimed at construction workers, utility workers, first responders and others who spend most of their time in the field. AT&T had previously upgraded the platform in 2013, 2014 and 2015.

AT&T is not the only company to feature PTT. Earlier this month, Persistent Systems introduced Dual Channel Push-to-Talk. Dual PTT, an accessory to the MPU5 Mobile Ad Hoc Networking (MANET) radio, allows users to select two of 16 talk groups, according to the press release. If the participant is using a stereo headphone, audio can be divided between the two speakers and individually controlled. Transmission by the user can be to either group or both simultaneously.