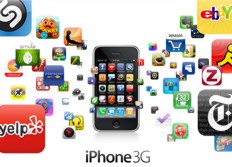 Data like this is sure to make AT&T smile. Their partnership with Apple continues to pay dividends, even with the short term financial drains its iPhone device subsidization model creates. And according to Boy Genius Report, the AT&T-Apple alliance may get even stronger. A new, faster iPhone which takes advantage of AT&T’s HSPDA 3G network is on tap for this Summer and may offer peak speeds of 7.2 Mbps, albeit across a fairly limited footprint for now. Additionally, AT&T may launch an Apple Mac based netbook for a subsidized price of $99. Subsidized netbooks usually require a two year mobile Internet subscription.

If you view the mobile Internet as the future of the wireless business, than AT&T appears to be off to a good start. But they do have their challenges. They are creating insatiable demand for 3G data with the iPhone – demand which they are having trouble meeting at times. If they’re not careful, they may become victims of their own mobile Internet success, and open the door for competitors to catch up. According to that AdMob Mobile Metrics data, the second fastest growing mobile web smartphone platform is Google’s Android (growing 5% in the past six months), which happens not to be on the AT&T network.