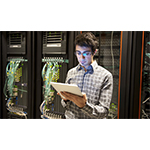 AT&T is introducing the disaggregated Network Operating System – dNOS – in an effort to stimulate the creation of flexible, open and less expensive equipment that fits easily into virtualized networks.

The open source project will be hosted by The Linux Foundation. The idea is to create a software framework enabling a broad and diverse equipment ecosystem – software developers, network operators, cloud providers, hardware makers, networking application developers and others – to use generic white box infrastructure to  provide cost and efficiency advantages.

AT&T dNOS
“Our goal with open sourcing the dNOS project is to create a community around an open framework to software-enable industry-standard white box hardware designs, such as those contributed to the Open Compute Project,” said John Medamana, vice president of Packet Optical Network for AT&T in a press release. “We’re excited to work with The Linux Foundation to bring this concept to reality. We invite others to join us to build the community and support this effort.”

AT&T hopes that dNOS becomes a key element of ongoing transitions to software-defined networks and network functions virtualization. Open Network Automation Platform (ONAP) is gaining acceptance as a way to create, manage and perform other functions for virtualized networks. dNOS operates at a more local level: It is aimed at becoming the common operating system for each device that resides on the network. dNOS will support existing network protocols and be able to expand to support emerging tools such as the P4 open source programming language, according to AT&T.

The code and collateral transition for the dNOS project is slated to start soon. “The dNOS project will help create a network operating system community that will benefit existing Linux Foundation projects like FRRouting and OpenSwitch, and pave the way for future projects to help drive innovation at the lower layers of the network stack,” said Arpit Joshipura, general manager of Networking, The Linux Foundation in the release.