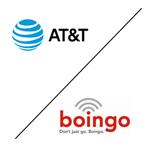 AT&T subscribers can now get Wi-Fi connectivity at more than 80 venues including major airports, military bases and other venues that feature Boingo’s Passpoint-certified networks, thanks to an expanded roaming agreement with the carrier.

Passpoint is a standardized hotspot technology that provides secure roaming between AT&T cellular and Boingo Wi-Fi networks. The Wi-Fi Alliance developed Passpoint, with support from the Wireless Broadband Alliance (WBA). AT&T and Boingo serve on the WBA board of directors, helping with ongoing research, trials and deployments for Passpoint and other wireless technologies.

The roaming between Boingo and AT&T is provided at no extra charge to AT&T subscribers.

“Boingo’s Passpoint footprint allows us to connect millions in more locations than ever, making it easier for travelers and troops to talk, text and stream over Wi-Fi,” said JR Wilson, vice president of tower strategy and roaming, AT&T, in a prepared statement. “The move is part of AT&T’s strategic network management initiatives that help accommodate rising mobile data traffic.”

He added that data traffic on the company’s mobile network has grown more than 470,000% since 2007, with much of the recent growth due to video, which now accounts for half of AT&T’s mobile data traffic.

“By 2022, we estimate video could make up more than 75% of AT&T’s mobile traffic driven by growth in 4K video, autonomous cars, drones, VR/AR and mobile gaming,” Wilson added.