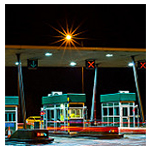 AT&T last week asked the FCC to address what it called “nefarious” inter-carrier compensation(ICC) practices including unusually high tandem switching and transport access charges and non-competitive 800-number database dips. In a blog post AT&T noted that such practices are counter-productive to FCC efforts to phase out the traditional approach toward inter-carrier compensation in favor of a “bill-and-keep” approach in which carriers will  pay few, if any, charges to one another for exchanging voice traffic.

Initially traffic pumpers received a portion of terminating per-minute access charges but that loophole was largely closed when the FCC ruled that competitive local carriers engaged in access stimulation – defined as those whose incoming calls exceeded their outgoing calls by a certain ratio – should not peg their access rates to the incumbent local carrier but instead to the lowest-priced price cap carrier in the state.

According to AT&T, however, there is now a new opportunity for traffic pumpers involving unusually high tandem switching and transport costs paid to terminating carriers. Those fees are mileage based, enabling a local carrier to deliberately configure its network to maximize mileage fees which it can then share with the traffic pumpers.

AT&T’s petition to the FCC asks the commission to forbear from tariffing tandem switching and transport access, arguing that the market is a competitive one, with companies such as Inteliquent, Level 3, Peerless Network and Hypercube offering services.

Currently, long-distance carriers must pay properly tariffed and billed tandem and transport charges, but according to AT&T “are not always clearly permitted to select the provider of those services or the most efficient means to transport traffic” – an economic relationship that AT&T calls “perverse.”

800-Number Database Dips
AT&T also asks the FCC to forbear from rules that permit local carriers to charge for per-query database dips on toll-free calls to their customers – charges AT&T says are sometimes non-competitive and which the local carriers may be sharing with traffic pumper customers.

Here, too, AT&T notes that competitive choices exist. But, the company argues, “toll-free database query charges assessed on [long-distance carriers] are not subject to any market discipline.”