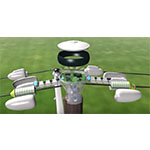 AT&T said today that it is in advanced discussions with power companies and others regarding trials of AT&T AirGig technology in at least two locations by this fall.

AT&T AirGig is an internally-developed wireless technology designed to be deployed using a series of plastic antennas on utility poles and to wirelessly follow the same path as the poles. The company also expects to use the technology to support high-speed fixed and mobile wireless service, which would be delivered from the AirGig backhaul network to individual customer locations or vehicles.

Today’s press release didn’t provide details on how the power companies would use the technology, but previously AT&T said the technology could support smart grid applications and early detection of line integrity issues.

AT&T AirGig
AT&T has taken care to make a distinction between AirGig and broadband powerline technology, a method of delivering broadband over actual power lines that never proved practical. As a company video illustrates, the technology uses power poles but not the wiring.

The wireless AirGig backhaul network will be based on millimeter wave technology – a move that makes sense, considering that the millimeter spectrum band is well suited to supporting higher broadband speeds. Distances covered are relatively short, but the company appears to have addressed that issue by regenerating signals at individual utility poles.

The idea behind AT&T AirGig would seem to make a lot of sense, as using existing infrastructure should yield big savings on broadband buildout costs. Importantly, such power infrastructure already reaches deep into rural areas And potentially this approach also might generate savings in comparison with other methods of delivering smart grid communications.

A key concern likely would be potential interference from the utility infrastructure but the use of plastic antennas may minimize that concern. AT&T claims more than 200 patents and patent applications for AirGig, noting that AT&T Labs engineers and scientists invented low-cost plastic antennas, a radio distributed antenna system, millimeter wave surface wave launchers and inductive power devices.

The company claims “multigigabit” speeds for the network.