With GigaEdge’s significantly faster and more powerful internet speeds, users are able to surf, stream, download, work, and game online at the same time, like never before. Customers will be able to download a two hour HD movie in 32 seconds and send a large file (250 MB) back to the office in just 40 seconds. And, with over 28 percent of U.S. households using 10 or more devices in the home on a daily basis1, GigaEdge offers enough speed for everyone to be connected at the same time.

“Atlantic Broadband is excited to deliver on its promise to bring cutting-edge speeds to the Connecticut residents and businesses we serve. And, we are thrilled to be the very first company in the state to deliver these residential speeds,” said David Isenberg, Atlantic Broadband’s President and Chief Revenue Officer. “GigaEdge and Pro GigaEdge will transform the way people communicate, work, and play online and we believe it has the power to positively impact the local economy and attract new businesses to the region.”

“As we celebrate nearly one year of serving eastern Connecticut, we are tremendously proud to bring GigaEdge and Pro GigaEdge to the region,” said Charles Hanley, Vice President and General Manager, Atlantic Broadband Connecticut region. “We are committed to continuing to provide the fastest internet speeds, the most complete entertainment, and the best hands-on local service to the communities we serve.” 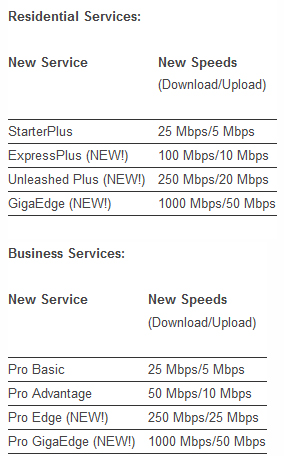