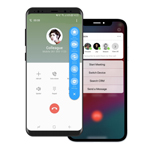 Workers who have ever had an office phone system with unified communications technology may appreciate capabilities such as conferencing, call recording, integration with customer relationship management (CRM) systems and the like. But workers appreciate mobility, too, and increasingly are using mobile phones in connection with their work. Giving workers the ability to have smartphone unified communications (UC) capabilities is a growing area, and some UC technology providers see it as a particularly compelling opportunity for telecom service providers.

Mobile UC today is delivered primarily through smartphone apps, noted Chris Carabello, senior director of product marketing for telecom technology developer Metaswitch, in an interview with Telecompetitor. And according to Carabello, with many of those apps, “mobile workers are not well integrated into . . . communications and collaborative services – the experience as a mobile worker isn’t very good.”

According to a press release,Max UC by Metaswitch gives users the ability to toggle between multiple functions with one click on their mobile devices for video calling, call recording, team messaging, video conferencing, workstream integration, CRM integration, collaboration and other features. A key capability is support for multiple user identities, enabling a user to have a different identity for work-related and personal calls, for example.

Like some other manufacturers, Metaswitch is beginning to incorporate artificial intelligence (AI) into its offerings. In this case, as Carabello explained, AI is used to “understand based on past calling history which identity to present.”

Other companies pursuing mobile UC opportunities, including some using an over-the-top app-based approach, are RingCentral, Sideline and Grasshopper. Broadsoft, like Metaswitch, has a UC offering designed for deployment within and integration with service provider networks. As Broadsoft describes in a 22-page white paper, the offering targets wireless and other types of telecom service providers.