Home » Are Community Broadband Networks the Answer for the Underserved? 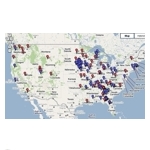 More than 54 U.S. cities own citywide fiber networks and another 79 own citywide cable networks, according to a new report from the New Rules Project, a program of the Institute for Local Self-Reliance. The ILSR also has made an interactive map available on-line that shows the location of each of these community owned broadband networks and enables users to click on a project to see project highlights.

“Even as we grow ever more dependent on the Internet for an expanding part of our lives, our choices for gaining access at a reasonable price, for both consumers and producers, are dwindling,” the report author argues in the report’s Executive Summary. “Tragically the Federal Communications Commission has all but abdicated its role in protecting open and competitive access to the Internet.”

Not all Telecompetitor readers will agree with those statements. But one of the more compelling aspects of the report is a series of mini case studies highlighting successful community networks, including:

A few unsuccessful community network projects have garnered a disproportionate amount of attention,  and it’s important to recognize that some other community projects have had considerably more success.

24 thoughts on “Are Community Broadband Networks the Answer for the Underserved?”