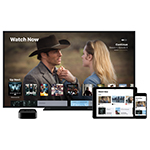 A new Apple TV app unifies and stays in sync with Apple TV, iPhone and iPad apps and includes single sign-on authentication features. Apple announced the new TV app this week along with a new Siri feature and a single sign-on that enables iOS device users to access their pay-TV apps more easily.

“Using apps on Apple TV, iPhone and iPad has become the primary way for so many of us to watch television,” said Eddy Cue, Apple’s senior vice president of Internet Software and Services. “The TV app shows you what to watch next and easily discover TV shows and movies from many apps in a single place.”

Single Sign-On Authentication App Advantage
Beginning in December, the TV app will introduce a compelling feature – a single sign-on authentication feature that allows subscribers to access content from a range of existing apps, that separately would require individual sign-ons and authentication. With the TV app, you sign-on once, and then access participating third party apps and their content. Participating apps will include pay-TV apps from providers like DIRECTV and DISH and other unnamed pay-TV providers.

But one glaring omission is Netflix, which as of now, does not participate in Apple’s TV app single sign-on feature. There are 8,000 apps, including 2,000 games and 1,600 video apps, available via Apple TV, according to the company.

In addition, Siri’s new Live Tune-In feature knows when live news and sports events start, enabling iOS device users to tune in by saying simple phrases, such as ¨Watch the Stanford game¨ or ¨Watch CBS News,¨ according to Apple’s press release. Users can also voice activate a search for live news and events using phrases, such as ¨Which games are on right now?¨