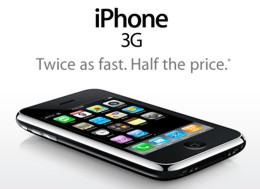 One of the most compelling story lines behind Friday’s release of the 3G iPhone was the term 3G itself. As I read and listened to all of the mainstream press, which included local radio “news” stories and local television news bottom screen tickers, I was amazed at the frequent use of the term 3G. Here’s a telecom term which causes great confusion even within the telecom industry, now being thrust into mainstream discussion. In some regards, Apple (and to some extent, AT&T) now owns the term 3G with the average consumer. They now control the perception of 3G, and it’s tied to the iPhone. Will they be able to leverage that ownership for additional competitive advantage? Perhaps. I suspect we’ll start to see other carriers now use the term 3G in their mainstream marketing messages, in a “hey, we have 3G too,” sort of way. It’s somewhat analogous to how Verizon has leveraged FTTH with FiOS. Mainstream consumers now perceive FTTH as FiOS. To the point where competitors are disingenuously claiming they offer FTTH too.

I can very easily see customers walking into Sprint and AT&T stores today, asking, do you have 3G? Those competitors will have to ensure they can place their 3G offering in the context of what the iPhone has to offer, not in the context of the actual technology explanation. Otherwise, they risk losing the attention span of those potential customers, who may opt for their perception of 3G, which is now, an iPhone.