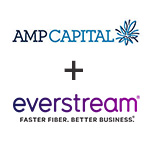 Everstream said that it plans to use the new capital for acquisitions and greenfield network builds as well as for network growth and development.

“AMP Capital shares a longer-term perspective for Everstream, bringing financial strength and strategic know-how to our business to position Everstream for years of continued success,” said Brett Lindsey, Everstream president and chief executive officer, in a prepared statement. “We look forward to joining forces with AMP Capital and, with their support, continuing on our trajectory of positive growth.”

Everstream will serve as the central business unit for AMP’s planned consolidation of telecom assets in North America. The growing company is expanding its international presence, including in North America, with offices in New York, Chicago and Irvine, California.

In August, we discussed that just a few months after global investment firm EQT Partners announced plans to purchase fiber network operator Lumos Networks, EQT fiber investment continued with the announcement of the purchase of Spirit Telecom, which is merging with Lumos Networks.