Home » Amazon May Be Subsidizing Price of New Kindle Fire 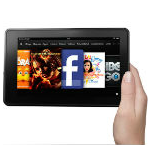 Amazon’s new line of Kindle Fire tablets cost considerably less than similar products from other manufacturers, including Apple, triggering speculation that Amazon is simply breaking even or even losing money on the sale of the devices.

The news came at an Amazon event yesterday, where according to a Wall Street Journal report, Amazon CEO Jeff Bezos said, “We want to make money when people use our devices, not when they buy our devices.”

The lower-cost Kindle Fires are similar to Google’s Nexus 7,  which sells for $199 to $249 and is also a 7” device. The larger-screen Kindle Fire models are more closely aligned with Apple’s iPad, which starts at $399 and can run more than $600 when LTE is included.

Amazon is also undercutting Apple on the cost of its LTE connectivity plan. Users can purchase a plan directly from Amazon that includes 250 megabytes per month for $49.99 a year, the WSJ reported. In contrast, the WSJ noted that a similar plan for the iPad runs about $180 a year.

ZDNet reports that the underlying carrier for Amazon’s wireless offering is AT&T.

As for where Amazon hopes to make its money, ZDNet reports that every Kindle Fire HD will display ads on the lock screen when the device is not in use. In addition, Amazon is hoping to make money on apps and through memberships in programs such as Prime, which offers free fast-shipping on products ordered from Amazon and which also includes streaming video that could be viewed on the Kindle Fire screen.

The ZDNet report also noted that Amazon claims its Wi-Fi capability is 41% faster than iPad3 and 54% faster than Google’s tablet because of a dual antenna design, dual-band 2.4GHz and 5GHz Wi-Fi and MIMO.

According to Amazon, the Kindle Fire now has a 22% share of the U.S. tablet market. A Yankee Group report from June found that the percentage of people intending to purchase a Kindle had declined from a year earlier.

But that’s likely to change now that the company has such a competitive product lineup.