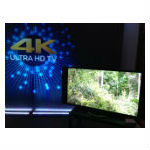 About one in five U.S. broadband users (19%) have broadband connections capable of supporting ultra HD or 4K TV, according to the latest Akamai State of the Internet Report, based on data from the third quarter of 2014. Akamai defined broadband users ready for 4K video to include those with connections supporting average throughput above 15 Mbps – a level Akamai said is “generally required” to support 4K adaptive bitrate streams.

The report also found an average U.S. broadband speed of 11.5 Mbps, which was virtually unchanged from the previous quarter but was up 21% over the same quarter a year earlier. The U.S. now ranks 12th globally on average broadband speed.

The average U.S. mobile broadband speed was measured at 5.8 Mbps for the 3Q 2014 study period.

4K TV Readiness and the FCC
Information such as U.S. 4K video readiness is particularly interesting in view of this week’s news that the FCC may redefine broadband for purposes of tracking broadband deployment progress. The FCC’s most recent definition of broadband was 4 Mbps downstream but the commission reportedly is poised to change that to 25 Mbps downstream. The FCC’s anticipated speed jump begins to look quite reasonable when Akamai’s estimates of the bandwidth required for 4K video is taken into account.

Regional Differences
Certain states – primarily in the eastern U.S. – have average bandwidth rates that are considerably higher than the U.S. average. Delaware, as usual, had the highest average connection speed, which Akamai measured at 17.4 Mbps for the study period. Other states with average connection speeds of 12.5 Mbps or higher include Washington, Connecticut, Utah, the District of Columbia, Virginia, Massachusetts, Rhode Island, Michigan and New Jersey.