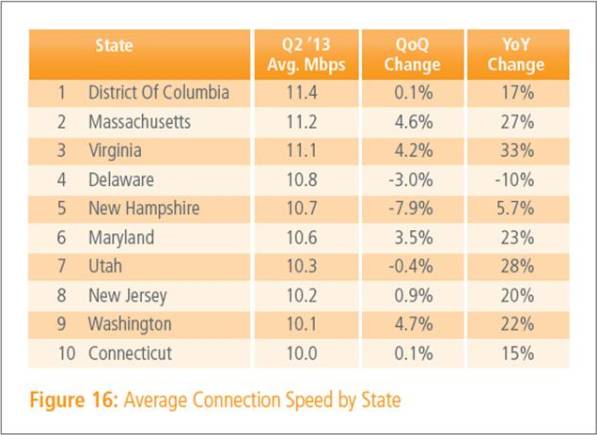 Alaska had the lowest average 1Q Internet connection speed in the U.S. at an average 8.2 Mbps despite posting a 10 percent quarterly increase. Coming in with averages just below 9 Mbps, Arkansas, Kentucky and New Mexico filled out the bottom four.

Tennessee had the smallest increase at 18 percent (to 47.6 Mbps). Missouri posted the largest – 71 percent to 54.2 Mbps. Though increasing 8.9 percent quarterly, Kentucky again brought up the rear in terms of average peak Internet connection speeds at 37.1 Mbps in 1Q. Arkansas ran next to last at 37.3 Mbps, a 6.1 percent increase.

Global Internet Connection Trends
Globally, average Internet connection speeds across the top 10 countries remained well above 10 Mbps in 1Q. South Korea topped all countries with an average 1Q’15 Internet speed of 23.6 Mbps. Six of the top 10 came in over 15 Mbps. Ireland (17.4 Mbps), Sweden (15.8 Mbps) and the Netherlands (15.3 Mbps) joined South Korea, Hong Kong (16.7 Mbps) and Japan (15.2 Mbps) in this regard.

Notable increases in average Internet connection speeds were made in Fiji – a 128 percent increase to 6.2 Mbps – among others. Year-over-year increases exceeding 30 percent were made in top 10 countries Ireland, Norway (14.1 Mbps) and Sweden.