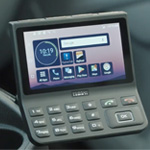 You could think of it as OnStar for the police, although it’s not from OnStar but Siyata Mobile, a company focused on creating unique cellular devices with an emphasis on in-vehicle connectivity. The offering can be used on the FirstNet first responder LTE network or other networks operated by AT&T or other carriers, and it’s the latest example of a range of offerings for first responders that have come from a variety of technology development companies in the last year or so.

Marc Seelenfreund, Siyata Mobile CEO, likens Siyata’s offering to land mobile radio, or LMR, “on steroids.” A key goal for the product was to use push-to-talk over cellular as an alternative to LMR.

The offering, which comes in a phablet form factor, also taps the same type of echo cancellation technology used for conference room speakerphones. And a driver can control the device from a button on the steering wheel or a foot pedal.

The product isn’t exclusive to public safety. It also targets school buses, trucking companies and other industries that rely on mobile communications. But FirstNet, operated by AT&T, was a big win for Siyata – a process that took a year and a half.

“Think of it as an Android smartphone tailor made for commercial,” said Seelenfreund. “It can do anything a smartphone can do including data.”

Wireless for First Responders
Other noteworthy developments involving wireless for first responders that Telecompetitor has covered in the last year or so include:

When AT&T won the contract to build and operate FirstNet, it opened up major opportunities for the carrier in the first responder market. But Verizon, which traditionally has had the lion’s share in that market, continues to pursue first responder opportunities and has even opened a 5G First Responder Lab with the goal of developing innovative public safety technology. Participating companies are working on applications involving 3D, analytics and other advanced technologies.