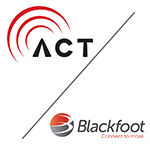 “Over the past several years, ACT and the Range Companies have established a fiber optic network extending from southeast Montana to Denver, Colorado with interfaces that allow for nationwide connectivity,” Aaron Sopko, General Manager at Advanced Communications Technology, said in a press release. “A partnership with a high caliber company such as Blackfoot Carrier Services will not only extend our reach but strengthen our offering through a combination of resources. Geographically diverse, low latency routes to major destinations are becoming more important, and ACT is able to accomplish both through partnerships such as this one with Blackfoot.”

Todd Twete, Blackfoot’s Director of Carrier Services, said that the service provider created the carrier services business unit last year. “We announced our newly established Blackfoot Carrier Services business unit in 2018 and we’re already seeing tremendous interest in partnership opportunities,” he said in the press release. “Expanding our fiber network with partners like ACT will allow businesses to reach their customers across a wider footprint with faster turn-up times and a full suite of voice and data solutions to meet their growing and demanding needs.

When Blackfoot Carrier Services was formed last October, the company said that it would be based on expanding partnerships in the Pacific Northwest and Mountain West regions. It will feature fully managed carrier class service; last mile Ethernet connectivity options including fiber, Ethernet over copper, licensed microwave and DSL; and collocation, data center and private IP networks.

In February, Blackfoot said that it would expand its’ business services offerings in Helena, MT and the surrounding areas. The company said it would provide voice, data and Internet services via Green Up IT and Information Technology Core (ITC). Both are Blackfoot Certified Channel Partners.