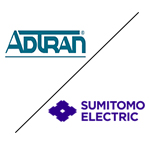 Adtran will gain considerable clout with cable companies as a result of its purchase of the North America EPON business of Sumitomo Electric Industries. Adtran already has EPON technology, but Japan-based Sumitomo has a dominant market share position in the North American EPON market, as well as in its home market, according to Adtran.

The Adtran Sumitomo deal also calls for Sumitomo EPON offerings to be integrated into Adtran’s SD-Access portfolio of broadband access equipment. In addition, Sumitomo will sell Adtran’s NG-PON2, Gfast, SD-Access and Mosaic cloud platform in the Japanese and Asian market. An Adtran spokesperson declined to provide details regarding terms of the transaction.

Adtran Sumitomo Deal
While North American telecom companies have primarily used fiber-to-the-home (FTTH) equipment based on the GPON standard, cable companies have relied primarily on EPON for their FTTH deployments – a similar but incompatible technology.

Traditionally, cablecos have used FTTH only for green field deployments because their traditional hybrid fiber coax (HFC) technology can support speeds comparable with GPON. But as consumer speed requirements continue to rise, some cablecos are beginning to overbuild existing HFC areas with FTTH, as well as using methods such as deep fiber and distributed access architecture (DAA) to boost HFC speeds. The Adtran Sumitomo deal should enable Adtran to expand its share in the cable market as cableco EPON demand rises.

He also noted that “[w]e will build upon Sumitomo Electric solutions to further accelerate the MSO market’s adoption of our open, programmable and scalable architectures, enabling them to accomplish their strategic network priorities.”

In referencing Adtran’s programmable and scalable architectures, Wilson likely is referencing Mosaic, Adtran’s management platform based on software-defined networking (SDN). Considering that some cablecos will use both FTTH and DAA as they upgrade their networks, they likely would find value in a management platform that can control both technologies.

In today’s press release, Hiroaki Nishimoto, general manager of Sumitomo Electric’s broad networks division, said Adtran was the right partner for Sumitomo because of its relationships with Tier 1 telcos and cablecos in North America, as well as Adtran’s leadership position in a “complementary product portfolio” and “its unique experience with deploying and maintaining remote electronics.”

Sales, engineering and support staff from Sumitimo’s North American subsidiary Sumitomo Electric Lightwave Corp. will be joining Adtran, including Howie Abramson in a newly appointed Adtran role of Vice President of Engineering, according to an Adtran press release.