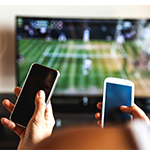 Windstream and YouTube will market YouTube TV to Windstream’s Kinetic broadband customers, offering the streaming TV service as an alternative to traditional pay-TV service. YouTubeTV partnerships also include a similar deal with Cincinnati Bell. Verizon is in bed with YouTube TV as well. I suspect more partnerships are on the way.

“Partnering with YouTube TV gives our customers a way to cut the cord without sacrificing live, local coverage and seamlessly access the latest on-demand content,” said Jeff Small, president of the company’s consumer and small and midsize business segment in a press release. “Fortunately, for our customers, the reliable high-speed network delivered by Kinetic is the best place to enjoy streaming video.”

YouTube TV Partnerships
YouTube TV competes with a number of streaming platforms, including Sling TV, AT&T TV Now and fuboTV, among others. It offers an OTT alternative to traditional pay-TV service, including local broadcast channels. Plans start at $49.99 per month.

The highly competitive nature of streaming TV claimed a recent victim, with Sony’s PlayStation Vue shutting down earlier this year, having amassed only 500K subscribers by some estimates. YouTube TV reportedly has about 2 million subscribers.

In some ways, the financial terms may not be that important. Windstream offers its own traditional video product, but that’s not stopping it from partnering with a competing streaming TV service. Broadband is the revenue and profit margin workhorse for carriers like Windstream, so adding a streaming TV option to enhance broadband (and remove video service headaches in some instances) makes a lot of sense to them and others.