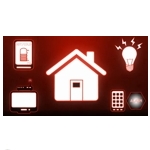 While we sometimes hear the term “vicious circle” to describe a no-win situation, ABI instead uses the term “virtuous cycle” to describe a variety of factors that are now coming together to fuel strong growth in home automation. “The home automation market has arrived at an inflection point that should see its appeal for the mass market grow tremendously over the next years,” the researchers write. “This inflection point . . . is driven in large part by a virtual cycle involving the availability of robust, standards-based ‘no new wires’ technologies such as ZigBee and Home Plug, the development of home automation software platforms such as those from Control4 and 4Home (now part of Motorola Mobility) and the entrance into the market by service providers such as telcos and cable operators, as well as security monitoring firms and even, in a more narrow scope, utility companies.”

Telecompetitor has been tracking developments in many of these areas, including home networking technologies and standards, cable company service launches,  and utility industry involvement.

On the cable company side, Comcast recently expanded its home security offering to include home automation and also expanded the number of markets where the services are offered.

On the telco side, Verizon has been quietly making moves into the home automation arena in recent months and according to local news reports is planning a launch soon in the Tampa Bay area—and possibly other areas as well.

Service providers will not be without challenges in the home automation market, however, noted Sam Lucero, practice director for M2M connectivity for ABI Research, in an announcement of the report findings. “Telco and cable operators now have to develop and deploy software management platforms to specifically enable the management of home monitoring services,” said Lucero. “This challenge has resulted in a swift consolidation within the small market that is privately-held home monitoring software platform vendors, with 4Home being acquired by Motorola Mobility, iControl and uControl merging and Xanboo being acquired by AT&T.”