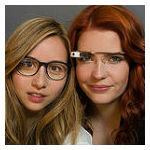 Consumer adoption has garnered the lion’s share of attention when it comes to growth prospects for smart glasses. Yet it’s the enterprise and public sectors that will fuel strong growth and uptake of smart glasses this year, according to the latest market research report from ABI Research.

2015 will be a big year for smart glasses, ABI says, as smart glasses sales growth will surge 150 percent higher year-over-year. Nearly all – over 90 percent – will be taken up by enterprise and public sector organizations such as remote assistance, police and military, security, warehouse and barcode scanning. In the consumer sector, smart glasses will find a place among gamers, ABI forecasts.

“Smart glasses were much hyped in 2014 as a smartphone replacement, largely on the back Google’s Glass product announced in early 2013,” ABI Research Senior Practice Director Nick Spencer commented. “However, 2014 showed the use case for smart glasses is task specific, for example remote assistance, security (facial and number plate recognition), augmented reality, and virtual reality. The Google Glass generalized use case is a primary reason for the changes announced last week.”

In contrast to smart glasses, demand will be fueled by consumers. Unit shipments of smart watches will skyrocket 300 percent year-over-year in 2015, ABI predicts, with Apple dominating the market by garnering a market share of nearly 50 percent.

“The use case for general-purpose smart glasses in the consumer space is weak, especially at a technical level, where projector quality has some way to go, as does battery life along with RF components and the miniaturization of these elements,” Spencer added. Also, at a practical level, most people are not prepared to wear glasses because many simply do not normally need to, and if they do, they need specific lenses.

“Lastly, many glass wearers have moved to wearing contact lenses. It just seems a retrograde form-factor and a very obtrusive one for the user and general public.”

Looking out over the longer term, ABI believes “a consumer wearable device needs to be far more subtle, with smart watches and, even better, wireless smart ear buds being a good example.”