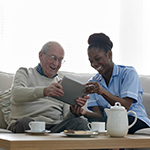 Discrete remote healthcare monitoring to consumers, especially in North America and western Europe, may be worth $34.5 billion by 2024, according to ABI Research. Ambient assisted living (AAL) stands to be one of the next hot areas within the broader smart home category, researchers said.

The report sees home care monitoring services, especially AAL, as the next step for service providers after their success in pushing smart home into the mainstream — and into many people’s homes. AAL, the press release says, has struggled as a standalone service. However, it has potential as a service within a smart home structure.

“Smart home has been a battleground pitting subscription against freemium services,” ABI Research Director Jonathan Collins said in a press release. “Vendors moving into the AAL space will not just have to address some of the outstanding marketing and service pricing issues around AAL adoption, but also continue to tackle the threat/opportunity of freemium or AAL-lite functionality.”

The ambient assisted living use case is seen as solid due to the aging demographic in areas in which smart home adoption is strong. AAL, according to ABI, provides “unobtrusive, long-term remote monitoring of those at risk living independently.” In 2018, British Gas in the U.K. launched a service that leveraged its installation workforce and Hive smart home devices.

In the broader picture, the establishment of a smart home structure enables initiatives such as these to be deployed with far lower costs of entry. Thus, instead of having to meet the high hurdle of being a standalone service, offerings such as home security and AAL can reach profitability much more quickly.

The penetration of smart home and smart home concepts bodes well for related niche services, both big and small. In January, Parks Associates said that 71% of U.S. households own a connected entertainment device, with many owning more than one. The bottom line is that the population is becoming accustomed to such services. AAL is positioned to leverage this acceptance and the aging of the population.