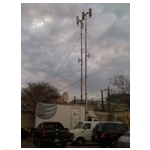 Last week the city of Austin, Texas transformed as tens of thousands of mobile data hungry individuals descended upon the downtown area for the annual South by Southwest (SxSW) conference. The time frame of this surge in mobile data use as well as mobile voice calls and text was sustained from March 12 to March 21. This same time last year, the iPhone and other data enabled mobile devices on the AT&T wireless network appeared to have serious issues with even basic functionality. AT&T wireless coverage as well as the backhaul network for data was a large portion of SxSW attendee complaints in 2009. This year for SxSW however, AT&T pulled out all the stops and fundamentally changed the way their service is perceived… at least in the denser downtown Austin metro.

Early reports indicated while AT&T 3G coverage at the the Austin airport (AUS) was spotty, as you moved towards downtown the AT&T experience began to shine. So what did AT&T do differently? To name a few items covered elsewhere:

In effect, what AT&T did was care about customer and subscriber perception for the SxSW event. As a result, many SxSW attendees are begging AT&T to do whatever they did in Austin in their own home cities where AT&T service is decidedly not yet up to SxSW 2010 quality.

** Note: I was at SxSW from the 11th to the 21st and anecdotally the only AT&T issues I had were related to backhaul but I always had full signal and my iPhone battery life has never been better.

So here’s a question for the audience and readers of Telecompetitor: What would you do differently if your city became host to an event that might draw thousands of folks with data enabled mobile devices?

2 thoughts on “A Year Later: AT&T Shines at SxSW”