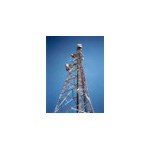 Fostered by the development of mobile broadband transmission technology such as EV-DO 2000, HSPA/HSPA+, WiMAX and LTE, the growing supply and demand for mobile data will lead telecommunications providers to triple their backhaul capacity between 2009 and 2013, according to a new In-Stat research report.

The telecom industry will need a full 90,000 gigabits-per-second of last mile backhaul network capacity worldwide to support the growing amounts of data, video and multimedia content being transmitted via mobile networks, according to InStat’s ‘Big Pipes–The Global Market for Cellular/WiMAX Backhaul’ report.

With backhaul needs of 80-100 Mbps, WiMAX and LTE rollouts increase the need for additional backhaul capacity, according to InStat. “Traditionally, voice has dominated the traffic going across a mobile operator’s network. With voice as the primary traffic component, an operator could meet its backhaul requirements with a couple of T-1’s per base station. That has all changed with operators relying on data for revenue growth.”

“Cellular and WiMAX backhaul provides that crucial link between the mobile operator’s radio access network and its core network,” explained In-Stat’s VP of Mobile Internet research Frank Dickson. “It does an operator no good to install a base station with 7.2 Mbps capacity if the backhaul is limited to 4.5 Mbps.”

Microwave transmission has traditionally been the predominant means of providing backhaul. That will continue to be the case going forward, according to the InStat report, though Ethernet is playing a growing role in providing backhaul for cellular and WiMAX networks.