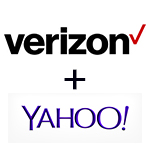 After weeks of speculation, the Verizon Yahoo purchase was announced today as a “definitive agreement” requiring regulatory and shareholder approvals. The deal, valued at $4.83 billion, is the latest and perhaps biggest step in Verizon’s mobile content strategy.

The Verizon Yahoo purchase “will put Verizon in a highly competitive position as a top global mobile media company, and help accelerate our revenue stream in digital advertising,” said Verizon Chairman and CEO Lowell McAdam in a press release announcing the purchase.

Verizon is purchasing key Yahoo assets including “market-leading premium content brands in major categories including finance, news and sports, as well as one of the most popular email services globally with approximately 225 million monthly active users,” according to the press release.

The deal does not include Yahoo’s cash or convertible notes, its shares in Alibaba Holdings, its shares in Yahoo Japan and some other investments or Yahoo’s non-core patents.

Verizon Yahoo Purchase
On the long-debated question of whether or not it’s OK for communications service providers to operate as “dumb pipes,” Verizon clearly believes the answer is “no.”

Verizon sees great value in the ability of its wireless network to gain knowledge about customers, including location-based information, and to use that information to customize advertising and content offerings, with customer consent.  In the last two years or so the company has made a range of moves to support this strategy, including:

Some industry observers see substantial challenges for Verizon as it pursues a mobile strategy, however.  The Wall Street Journal noted, for example, that Yahoo’s share in the U.S. digital ad market is expected to be 3.4% for 2016, while Google and Facebook together account for more than half of the market, currently valued at $69 billion. AOL has 1.8% of the market, the WSJ noted.

Verizon’s mobile content strategy also has drawn criticism from those who believe the company’s investment in company’s such as AOL and Yahoo detracts from its ability to invest in its network infrastructure, particularly on the landline side of its business. Those critics tend to believe that it’s fine for service providers to pursue a dumb pipe strategy – as long as they deliver the highest quality and highest capacity pipes possible.

It could be years before we know whether Verizon has made the right choices on the dumb-versus- smart-pipe question. In the meantime, Verizon CEO Lowell McAdam has said he will offer additional details on the Verizon Yahoo purchase on an earnings webcast tomorrow.