Home » 2019 Was a Big Year for Telecom Mergers and Acquisitions 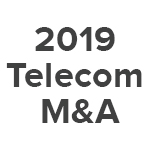 As 2019 winds toward a close, the fate of the proposed Sprint/ T-Mobile merger is still uncertain. But whatever the fate of that deal, 2019 was a big year for telecom/ broadband mergers and acquisitions – and virtually no segment of the industry was exempt from the trend.

Investment Firms
Some investment firms are moving into or expanding their telecom/ broadband operator holdings, including WaveDivision Capital, which previously invested in several broadband providers. Wave said earlier this year that it will purchase Frontier’s operations in Washington, Oregon, Idaho and Montana.

Also this year, investment firms EQT Partners and Digital Colony led a deal to acquire competitive fiber provider Zayo, which itself has made numerous acquisitions over the years.

Rural Network Operators
A considerable amount of this year’s M&A involved Tier 2 and Tier 3 network operators – perhaps because policymakers seem to have awakened to the importance of ensuring that all Americans, including those in rural areas, have broadband available to them. Other drivers may be the relative lack of competition in rural areas, as well as the recognition that future mobile networks will need dense backhaul infrastructure that Tier 2 and Tier 3 carriers are well-positioned to provide.

Telecom/ broadband M&A deals that involved an independent telco as either a buyer or seller this year include:

Telecom Supplier and Vendor Deals
A few notable telecom vendor deals occured in 2019 as well, including:

This is certainly not an all inclusive list, as other deals were also announced in 2019. But it does illustrate quite a busy year for M&A in the broadband sector.